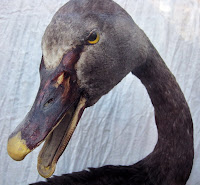 On Marianne’s third date with Warren, he fiddled with his breadstick and said he had something to tell her.
“Kids,” she thought, “he’s got kids.”
A goose.
He brought it over to her house, tucked under his arm like a bottle of wine.
They sat on the couch with the goose in between them. Marianne wanted things to work, and so she turned to the bird and smiled her most winning smile.
It pecked at her ear and swallowed her rhinestone clip-on earring.
The goose was a miserable beast. It defecated all over the driveway and scared the cat up a tree. It ate bald patches on her lawn. At night, Warren insisted the goose join them in the bedroom, and whenever they made love, it perched on the pillows and watched, bobbing its head.
Marianne told Warren it was the goose, or her.
“Don’t be silly, Marianne,” he said.
She thought that maybe she and the goose just needed a fresh start. She bought it a kiddie pool to splash in. The goose ate through the plastic lining of the pool and began joining her in the shower. It hissed whenever she turned off the tap.
Not long after that, Marianne discovered Warren was cheating on her with his office assistant.
She went home and ran over the goose with the car.
The stuffed goose sat on Marianne’s front porch. Mid-afternoons when the sun was hottest, its shadow provided the perfect patch of shade for her napping cat.
Posted by Brittany Smith at Friday, November 19, 2010