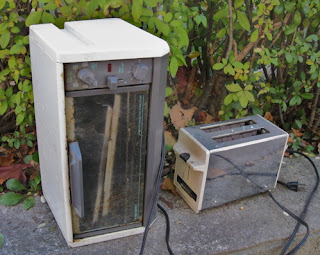 He was there first, waiting quietly on the countertop, crumbs scattered beneath him. Before she arrived, he never cared about his mess. He pretended not to notice her at first, but couldn’t stop sneaking glances at her smooth, polished surface.
She had buttons and dials that sent her from warm to broil with a flick.
There wasn’t room enough for the two of them in that kitchen.
He was relocated to the cupboard. She sat smugly beside the blender. He was jealous then. Of the way she cooked a perfect turkey. That she was self-cleaning. The cheerful sound her timer made when she was finished.
(He had no dinging sound, just an almost-inaudible pop.)
He started burning waffles.
It wasn’t long before he found himself by the back door.
And as he sat in a cardboard box without a chance of sighting her, he felt a loss deep in his coils. Forgotten, he dwelled in his pain and loneliness for a long time.
Then one day, she appeared beside him. She was rusted and sticky with food and her door creaked, but he knew it was her.
At the curb, they sat side by side, looking out together and contemplating the end of their days. And he was immeasurably glad.
Posted by Brittany Smith at Sunday, November 14, 2010