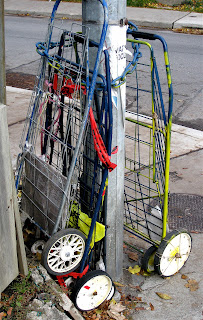 That Margaret's got a lot of nerve.
On Monday we were all meeting at our shopping buggies, as usual, to go and get our groceries done, and Margaret arrived with Louis Middleton in tow.
It was outrageous: him being made a widower not ten months before, and then up they come, grinning like teenagers. Vera and I gave him a look fit to raise the dead.

We weren't thrilled about having to wait for the likes of them either, because Price Chopper had bananas on for thirty-nine cents a pound and chicken pot pies three for five dollars. While quantities last.
(My dear William used to love those pot pies. He's been gone five years and I still can't stop buying them on sale.)
"Sorry I'm late," Miss Margaret purrs, smiling as if we're in cahoots.
I notice she must've put a rinse in her hair, because it's not looking so grey.
It's no use fancying yourself up this late in the game, Missy, I want to say to her. We're all just "While Quantities Last."


At Price Chopper we usually stick together, but Louis seems not to know this, because he starts wheeling Margaret's buggy like it's the Indianapolis 500. Vera's knees are shot and my hip is bothering me so we let him barrel ahead, but then I see what's he's after: there's only one bunch of sale bananas left.
Hip-be-damned, I'd rather drop dead than let Louis Middleton get those bananas. I veer around the peppers and bypass the potatoes. I don't see the baby stroller until the last minute. I swerve to miss it, and crash into a holiday display of mixed nuts in the shell. Well, you can imagine what happened next.
Louis got those bananas. And didn't he just break the bunch it in half, and give some to Miss Margaret? The nerve.
Posted by Brittany Smith at Monday, November 29, 2010