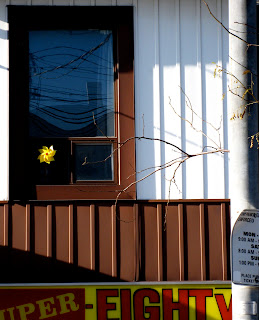 Henry decided that Tuesday afternoon would be a good time to die. Wednesday was his day off and they weren't expecting him back at the factory until Thursday morning. And his mother was in Puerto Vallarta on her yearly trip with the ladies from her senior's group.
On Tuesday, Henry woke early, made coffee, and began to clean his one-room apartment. He scrubbed the kitchen cupboards and mopped the floor. He emptied the refrigerator and then sat down to pay his bills.
Shortly after noon, Henry changed into his best clothes: a blue suit his mother had bought him for his father's funeral, ten years before.
In the third drawer of his dresser, Henry retrieved his father's gun and placed it on the bed. His father had kept the gun loaded. Henry surveyed his apartment a last time, and realized he'd forgotten to close the blinds. Afraid that a neighbor might look in at an inopportune moment, he went to shut them.
Outside, the February sky was clear and blue. Henry saw a woman and little girl leaving the video store below. The girl was holding a yellow plastic pinwheel. She began spinning circles on the sidewalk. Her blond hair flew out around her and the blades of the yellow pinwheel twirled. Henry's breath caught in his throat. She seemed to be made of sunlight.
Then the woman yanked on the girl's free hand to pull her along and the girl dropped the pinwheel into a puddle. She tried to retrieve it, but the woman hustled her into the car. The last Henry saw of the girl, was her blond hair and small face in the rear window as they drove away.

Without knowing why, Henry walked to his door and unlocked it. He went along the long hallway and down the stairs. Outside, he scooped the pinwheel out of the puddle.
Henry knew that then he wasn't ready to die--not until he'd returned the pinwheel to the little girl. He placed it in his window so when she came back, she would see it, and know it wasn't lost.
Posted by Brittany Smith at Wednesday, December 29, 2010