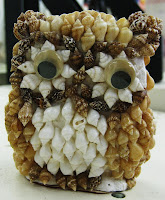 Shelby dreamed of flying. Day after day, she sat on the shelf in Mr. Whatsit's Tourist Emporium and peered through the front window of the store at the birds. She could see gulls wheeling through the sky, and hear the songs of the seaside sparrows. Down at the pier, pelicans fished, and pigeons vied for popcorn and crumbs dropped by tourists. But Shelby could no more join the birds outside, than fly to the moon.
She became depressed and let herself go. Dust collected in the grooves of her shells. Her price tag yellowed and curled.
New knick-knacks came and took a place on the shelf and were purchased immediately. Shelby remained at the back, forgotten.
But then one day, a little boy and his family came into Mr. Whatsit's shop. When they got to Shelby, she closed her eyes and waited to be passed by. But Shelby didn't know that this particular boy had been looking for a bird just like her. And he wasn't the type of child to mind so much about the dust. Shelby was placed into a dark bag, and was jostled around for what seemed like a long time. She fell into a deep sleep and dreamed that she was dead.
A loud sound scared her awake. It was a terrible shrieking, like the cry of an eagle, but much worse. In the darkness, Shelby trembled so hard, she thought she might shatter.
Then the boy's hand reached in and lifted Shelby out of the bag. She was nearly blinded by the sudden burst of light. When her eyes adjusted, she could hardly believe what she saw. Clouds. Thick, fluffy white clouds. And they were beneath her. How could that be?
The boy continued to hold Shelby up to the window. He spoke softly to her, and his words were sweeter in her ears than any bird song she'd ever heard.
"Look," the boy said, "we're flying."
Posted by Brittany Smith at Monday, December 27, 2010