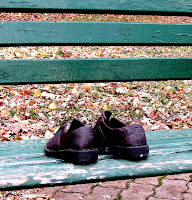 Wilson Niblet was no ordinary squirrel. For one thing, he wasn't fond of nuts.
He didn't care for hoarding, and hated the taste of bark. The inside of trees was too damp for his liking, and he detested the smell of pine.


The other squirrels called Wilson odd.
He thought they were small-minded.
He spent most of his days perched on a windowsill reading books over the shoulder of Harold Miller, who sat inside, in an armchair by the window. Wilson especially liked the philosophy books. "Every man is capable of greatness," Wilson read, exchanging the word man, for squirrel.


One afternoon on his way to the windowsill, Wilson spotted Don Lowell's brown shoes outside Jane Friedman's house. Don, being a polite sort, had removed his shoes upon entering. Wilson's body twitched and his grey fur stood on end. He wanted those loafers. He needed them. No more living inside frigid trees! Wilson Niblet would winter in style. "Fortune favors the bold," Wilson told himself as he crept toward the shoes. "A squirrel who hesitates is lost."
Later, Don Lowell stood on the porch, shoeless and confused. Jane put her hand on his arm. Surely he couldn't drive home in his sock feet. Maybe he would have one more glass of eggnog?


Don spent the entire afternoon inside Jane's house, and then some of the evening. By the time he was ready to look again, Don didn't much care if he ever found his shoes.
Posted by Brittany Smith at Wednesday, December 01, 2010