Casual Fridays: For the love of hitchin' a ride...

Hi guys, it's Britt. I don't know if I should be sharing this. But here it is:
I love hitchhiking. Don't tell my mom.

Now, just to be clear, I'm not talking about car pooling or ride shares. I'm speaking of standing on the side of the road, shouldering your backpack, perhaps holding onto a cardboard sign with your destination written on it, while, with the other hand you stick out your thumb.
It's terrifying. It's exhilarating. It's pretty stupid.
But the thing I love about hitchhiking, is that it allows you to get to know people in a way you never otherwise would. While you travel in their cars, sharing the same smells and sights and breathing space, you learn about each other. And then you say goodbye. Perhaps never to meet again. But in small ways, your stories have changed.

Every hitchhiker needs a buddy. And for years, mine was the righteous, Benjamin Thompson. Ben and I had many hitchhiking adventures. Can I tell you my favorite story?
I was visiting Ben when he lived in Inveremere, BC and one afternoon, we went for a walk. We found ourselves down by the train yard, just as a freight train was slowly pulling out.

This is roughly the conversation that followed:


Ben: "I've always wanted to hitch a ride on a train."
Britt: "Yeah. That would be totally amazing."
Ben:(gesturing toward the moving train) "There's one now."

In the next few moments, Ben and I jogged alongside the train and climbed on. What followed was a three-hour journey through the mountains crouched on the platform between two rail cars, and hanging on for dear life. When the train finally stopped, Ben and I scrambled off and looked around. We had no idea where we were or how we were going to get back home. So naturally, we found the nearest road and stuck out our thumbs.


Living in a city, I don't get much chance to hitchhike anymore. And there are definitely fears that come up when you're in your thirties that you never felt when you were in your twenties. I'm not swearing I'll hitchhike again, but I'm not promising I won't, either.
So share your tale of the last time you thumbed a ride, or tell me why I'm crazy.
Have an inspired weekend dear adventurers, and I'll see you back here on Monday for a new story. 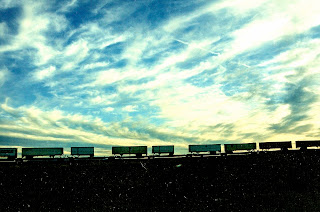