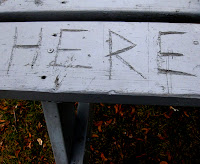 Every morning, Mark went to the park to visit the statue of Alexander Graham Bell. The statue was desperately in need of repair. The old man's broad forehead was chipped, his ears were cracked, and most of his nose was missing.
Mark knew that his own brain was like this statue: slowly crumbling.
"Craebler-Jakob syndrome," the doctor said. A rare degenerative brain disease. Unheard of in someone so young. The long-term memory goes first. Then, over time, the short-term memory breaks down. And it's completely incurable.
Outside the doctor's office in his car, Mark had examined his face in the rearview mirror. He looked the same. But somewhere deep inside his skull, things were changing.
At first, just the edges of Mark's memories blurred. What was the name of the street their old apartment was on? What restaurant did they eat at on that New Year's Eve when she wore that silver dress, and they made love in the hallway?
Then it was the bigger things. The tremble in her voice when she told him it was over. The glassy green of her eyes when she cried. Her face began to float in his mind, featureless, like a balloon.
One November morning in the park, Mark forgot where he was. Panicked, he searched for a clue. He saw bare trees and picnic tables and a playground. In front of him was a statue of an old bearded man with half of his face missing.
Mark stuffed his hands into his coat pockets and discovered a set of keys. They must be his, but he couldn't conceive of what they would unlock. On the picnic table closest to him, Mark used the edge of a key to scratch a word into the wood. He sat down heavily.
Where am I? he asked himself. He looked to the table for an answer.
Here.
Where is she?
Gone.
Where am I?
Here.
On the bench, Mark prayed for someone to come and find him.
Posted by Brittany Smith at Monday, January 03, 2011