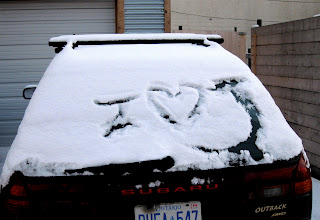 Janina McFee wasn't a pretty girl. She had smallish eyes and a large pale face. Her brown hair always managed to look greasy, and lay plastered to her head. Her eyebrows were unruly and there was a sizable gap between her two front teeth.
When she was eight years old, and it was clear to everyone that she would never be pretty,  Janina's mother started calling her Jan. Three sturdy, plain little letters.
"Beauty is fleeting," Jan's mother said, "be a good woman instead."
Jan worked hard to be good, and tried to forget her disappointment at the lost letters in her name.
Years passed.
Then one day, something strange happened. First, it was a postcard of the Mona Lisa tucked under the left windshield wiper of Jan's car. She searched the Mona Lisa's face for a clue, but the woman of mystery told her nothing. She flipped over the card. It was blank.
One morning Jan discovered the hood of her car covered in pebbles. The shape the pebbles made might have been a heart, if she'd chosen to see it that way. But Jan assumed it was a prank. Why wouldn't she?  "Stupid kids," she muttered, flinging the stones from her hood.
But then, today....
Jan lowers her shopping bag. She stares at the words written in the snow. It is clear as day. This is no prank. She turns and looks around, but doesn't see anyone watching her. She feels flushed and strange, like she wants to laugh and cry at the same time.

Those three shapes written in the snow caused Janina McFee's poor heart to open. And this made her more beautiful than she ever could have imagined.
Posted by Brittany Smith at Monday, January 31, 2011