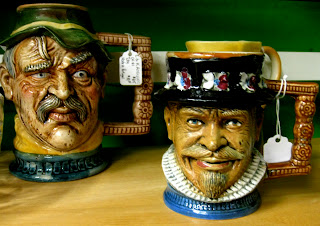 "Louis?"
"Yes, Jerry?"
"You busy?"
"Do I look like I'm busy? What is it, Jerry?"
"I've been thinking 'bout the good ol' days. Remember the good ol' days?"
"No."
"Yes you do, Louis. You're just pretending you don't."
"There's no point in endlessly rehashing the past. We're here now, so we might as well start getting used to it."
"But--"
"No buts, Jerry. She's gone, and he doesn't want to see us anymore. Can't stand the sight of us. Shipped us off to the charity store. Just let it go."
Silence. Long pause. Jerry begins to sing a tune. Softly at first, and then louder.
"I needed the shelter of someone's arms. There you were. I needed someone to understand my ups and downs, there you were."

"What are you singing, Jerry?"
"Nuthin'. Just a song. Remember how they used to play music every--"
"--Friday night. Yes, Jerry, I guess I do."
"Tell me the way it was, Louis. When we were with them, and everything was just right."
"You were there too, you old oaf."
"Yeah, but I like the way you tell it."
"Oh, alright. If you insist. Fridays after dinner. She'd clear away the dishes and he'd put on the music. Do you remember the whoosh the record made as he pulled it from its sleeve? Or that pop of the needle hitting the record and finding the groove? Once, they started to dance before she'd even finished the dishes. Her hands were still in those rubber gloves, dripping soapy water over the floor. But they didn't mind. And then every Friday after the dancing..."
"We'd come out!"
"Yes, Jerry. He'd pull us off the shelf and open a bottle of beer. Pour the beer. Half for him, half for her."
"The bubbles tickled my insides. And, oh! Don't forget those cheese and crackers."

"You and me on the coffee table, Jerry, with a plate of cheese and crackers in between us and the music playing on, like there was all the time in the world."
"Louis?"
"Yes, Jerry?"
"So that's it then?"
"What?"
"The good ol' days. They're long gone, right?"
"Well, yes and no. Those days are done. But there's always a chance."
"Of what, Louis?"
"A chance to begin again. To make new good ol' days."
"I guess that's what's nice about life, eh, Louis? That chance."
Louis and Jerry begin to sing softly together.

click here and sing along with Jerry and Louis.
Posted by Brittany Smith at Wednesday, January 12, 2011