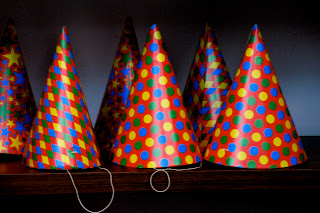 Lucie's mom found the poster on a cork board at the grocery store."Rusty Nail's Clowns and Misfits. Traveling the World to Bring You the Best in Entertainment."
On her sixth birthday, the clowns arrived in a white panel van with a circus scene painted on the side. Lucie forgot all about putting on her party dress and ran outside to meet them. One-by-one, the six clowns got out. They were a bright blur of long limbs, wild hair, and painted faces.
The clown with the green curls and purple velvet suit removed his top hat and bowed deeply.
"Pleased to meet you, little lass. I am Rusty Nails."
Standing on the lawn in her slip and undershirt, Lucie performed her best curtsy.
The party started. Clowns mingled through the crowd, making balloon animals and juggling everything from people's empty plates, to their glasses of punch.
It would have been a perfect afternoon, were it not for the twins, Igmar and Dorothy. They were Lucie's cousins, and like most ignored and undisciplined children, they were very, very bad.

First, Igmar tripped a juggling clown. Red fruit punch rained down on the crowd. Next, Dorothy shoved a clown on stilts into the pool. The poor clown's face paint ran, and created a white skin that formed on the surface of the water. The stilts flew into the neighbor's yard. Then, Igmar plucked Rusty's red nose from his face and hid it somewhere in the doghouse.
Rusty was furious. Lucie discovered him smoking on the other side of the hedge, a pink circle of unpainted skin at the tip of his white nose. She sat down beside him and rested her head on her knees.
"I'm sorry, Rusty," she said softly. "My cousins aren't any good."
He nodded and squinted through smoke. "Thing is, we're not ordinary clowns. We're from the road. And there's a code of honor on the road." He pulled on his cigarette and when he spoke again, there was something hard in his voice. "Dishonorable folks get theirs."
Lucie wasn't sure she understood was "dishonorable" was, or what "getting theirs," could mean, but she nodded her head in agreement and her paper party hat bobbed up and down.
Then Rusty produced a red silk rose from behind his ear and held it out to her. "Happy birthday, little lass," he said.
It wasn't until after the party when the clowns had left, that someone noticed the twins were missing.
Posted by Brittany Smith at Monday, January 10, 2011