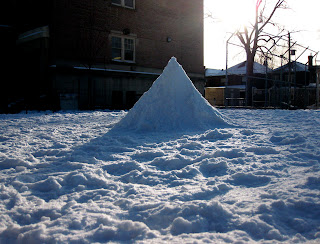 Miss Hastings was Wade's fourth-grade teacher. She had square glasses and brown hair she wore held back by a clip. One day after school, Wade went back into the classroom to retrieve his forgotten lunch bag and found his teacher looking out the window, her long hair loose and falling over her shoulders.
She'd turned from the window and smiled and Wade felt dizzy. He thought maybe he'd throw up--like he'd gone on the Zipper at the fair too many times. Walking home, he realized it was just like being on the Zipper, because as soon as it was over he wanted to feel it again.
They were learning about Ancient Egyptians. "In ancient Egypt, the Pharaohs and their Queens were buried together inside the great pyramids," Miss Hastings said.
Wade looked at the pictures of Cleopatra in his book. He imagined Miss Hastings wearing a golden crown, her eyes beneath her glasses dark with kohl makeup.
One night before dinner, he asked his parents: "If a boy loves a girl, what should he do?
His dad peered over his newspaper and shrugged. "There's no use trying," he said, "you can't please a female."
"Demonstrate," his mother said, plunging a knife into the center of a roasted chicken, "show her how much you care."
Wade had an idea. The next day at recess, he gathered up as much snow as he could and built his structure in middle of the schoolyard. By 3:00, he could barely sit still at his desk. He was so excited for her to see it.
Finally, the bell sounded. They put on their boots and coats and snow pants. Miss Hastings led the line of children outside. When they rounded the corner, Wade's heart sank. In the spot where his beautiful pyramid should be, was nothing but scattered snow. Someone had destroyed it.
Wade started to cry. Hot tears of disappointment ran down his cheeks. He gulped for air and his small chest shook.
Then she was beside him, leaning down, her concerned face close to his.
"Wade, are you alright?" she asked, taking his hand.
Wade felt the warm pressure of her hand in his. He smiled at her through his tears.
Posted by Brittany Smith at Wednesday, January 19, 2011