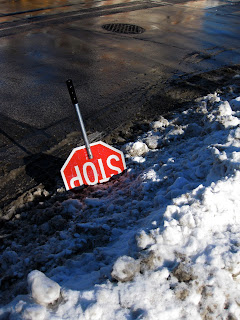 This job is my calling. I was guided to it, just like Joan of Arc.

Joan wore a suit of armor when she went into battle. I wear an orange and yellow vest with reflective stripes on the front and back. On my head is a matching cap, and my hands are in yellow gloves. Every night at home, I polish my whistle. When I step out into an intersection, my whistle gleams.
It was a Monday afternoon when I arrived at my corner to find that two-bit phony, Marilyn Myers working my crossing.
Imagine this: Marilyn's long hair is loose, and her head is bare. Her vest is unzipped, and she's got no yellow gloves to speak of. And no respect as far as I can tell. She's waltzing across the street with those children behind her, without a care in this world-- acting like their precious lives aren't in her hands. She even pauses to wave at me, "Afternoon, Gladys," she says.
Well, didn't I just feel a terrible roar rising in my throat?

I thought I kept that roar to myself, but it turns out that I didn't.
The doctors here say things about what happened next. They say that I charged at Marilyn Myers and knocked her over in the street. They say that I pummeled her with the butt of my stop sign.

Well, I don't know about that. But someone ripped the stop sign from my hands, and I did feel a man's arms go around me from behind. And then I heard shouting and sirens in the distance getting closer.
"Citizen's arrest," they called it. As if that driver who got out of his car and attacked me was a hero. As if I was dangerous. I'll tell you what's dangerous: letting those children see me, their treasured crossing guard being brutalized like that.
They say I’ll be in this institution for awhile. They say I need “treatment.” They can say whatever they like. I know the truth. Joan of Arc was burned at the stake because they were afraid of her. And I'll tell you a secret: I've still got my whistle. Every day I'm in my room here, polishing and polishing it. As soon as they let me out, I'll go back to my intersection. Those children need me. 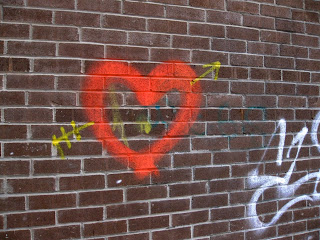