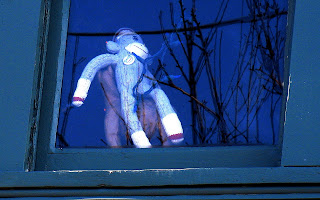 Marvin the sock monkey dreamed of shoes. Sneakers mostly, and sometimes boots.
He remembered the rainy spring days, when, as a pair of socks, he got to travel inside Madeline's gumboots. He felt the tickle of rubber, and recalled the splash of puddles and children laughing. And he'd never forget the lovely smell of fresh mud.
One day, Madeline's well-intentioned grandmother, Ida, had transformed Marvin from a pair of wool socks into a sock monkey. As a sock monkey, Marvin mostly sat and gazed out Madeline's window. He could see three houses, nine trees, and a small white dog.
There was a smile stitched on Marvin's face, but if you looked closely, you could see that something about that smile was not quite right. Inside, his heart was terribly sad. He longed for travel, for motion, for new sights and smells. Marvin the sock monkey had itchy feet.
On Saturday morning, Ida took Madeline shopping. Madeline carried Marvin in her bag with his head poking out the top. As they walked through the aisles of the department store, Marvin was delighted by the feeling of air on his face. When they stopped to sniff some bottles of perfume, Marvin got the chance he'd been waiting for.
"Goodbye, dear Madeline. May we meet again someday," Marvin whispered before tumbling head-first out of the bag.
He landed on the floor beside the cosmetics counter. Madeline and her grandmother moved on, leaving the little monkey behind.
You would think Marvin was frightened. You would assume he felt quite alone.
But this time, Marvin's smile was wide and true. Because Marvin wasn't the settling down kind of stuffed animal. He knew that sometimes, being lost is exactly the right place to be.
And so began the long journey of Marvin the sock monkey.
Posted by Brittany Smith at Monday, February 21, 2011