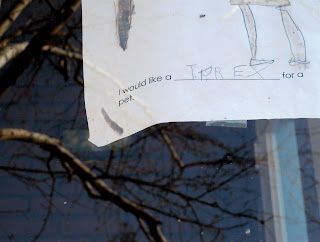 Ellie and the T-Rex
Part 2
Have you ever heard a Tyrannosaurus Rex roar?
Imagine your eardrums nearly bursting and your heart jumping around in your chest like it wants to get out. The skin on your arms is pimpled with gooseflesh, and all the little hairs on your neck stand on end. Feel your stomach flip and your legs turn to jelly. There. That's about right.
When she arrived at school the next morning, Ellie found Barbara-Anne and the girls standing together, blocking the doorway.
"Hey, smelly Ellie," Barbara called, "we've got a surprise for you."
Ellie was scared and for a moment, forgot that behind the school where she'd left him, was her T-Rex.
She'd looped a jump-rope twice around his huge scaly ankle, fastened the rope to a chain link fence, and told the dinosaur to wait. Much to her surprise, the T-Rex wagged its tail (nearly uprooting two trees), and settled down for a nap. Ellie continued on alone.
"Hi Ellie," Barbara-Anne said, smiling. "Do you want your surprise?"
Ellie didn't notice the bucket Barbara-Anne was holding behind her back until it was too late.
Mud poured over Ellie's head, ran down her hair, and oozed into the back of her shirt. She gasped in shock at the cold. The girls laughed. Ellie's nose began to tingle and she felt the tears starting to come.

"What's wrong, smelly Ellie?" Barbara said, "Are you gonna cry?"
Then Ellie heard a sound. Boom. Boom. Boom. Like heavy footsteps getting closer. Ellie remembered that today was a special day because she wasn't alone. The T-Rex was coming to defend her.

Ellie felt something strong and fierce rising in her chest. She opened her mouth, and out came a ferocious roar. Ellie roared with all of her might.
Barbara-Anne dropped the bucket and ran. The group of girls followed her.
When Ellie turned around, she didn't see the T-Rex standing behind her, as she'd expected. And when she checked behind the school, she saw that the dinosaur had vanished.
That was the last day Ellie ever had to call her mother to come and get her at school. Barbara-Anne and the girls never bothered her again.
For a long time after that, Ellie wondered what had happened to her Tyrannosaurus Rex. She looked and looked, but found no trace of him.

Then one day, she was taking a shortcut home through the park and came across the jump-rope. And it was torn in two.