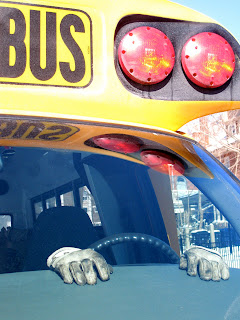 Mr. Wickson, our bus driver is an alien. At night, he beams to his spaceship. In the mornings, he comes back to earth to take us to school.
He likes to eat dogs and cats. He told David Fraser that his dog, Marley wasn't allowed on the bus, cause he really just wanted to gobble Marley up. But he couldn't say that in front of us cause then we'd know the truth.
He also has eyes in the back of his head. He told us that, and we didn't believe him, but then he knew Jon Hunter was giving Stan Roberts an indian rubber burn in the back seat, and he didn't even have to turn around. Mr. Wickson's alien eyes must be specially invisible, cause when I tried to look for them, all I could see was his regular brown hair.
I told my Mom that the kids on the bus were in danger from a dog-eating alien and she said: "Olivia, we don't need any more of your tall tales." Then I tried to talk to my big sister, Margo about it. "Can it, squirt," she said. But Margo's boyfriend, Rick was interested.

"Have you seen stitches on the sides of his face?" he asked.
"What?"
"Most aliens use a human body as a host because their true form is too terrifying for us to see. But they have to get inside the body some way. So they saw off the face--"
"Rick, that's enough," Mom said.
"And watch out for his tongue," Rick added, "it's forked like a snake."
The next day, instead of getting off the bus at my stop, I stood in front of Mr. Wickson, staring.

He leaned toward me. "Olivia Mercer, what are you doing?" he asked.
"Looking for your stitches," I said. Then I whispered: "I know what you are."
Outside the bus, Mom and our dog, Blackie were waiting. "Olivia, for heaven's sake, hurry up," Mom said. Blackie barked.

Mr. Wickson smiled. "Good night, Olivia," he said.
Just as I turned, I saw him lick his lips. And I swear his tongue was forked.
Posted by Brittany Smith at Wednesday, March 30, 2011