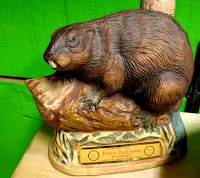 Sonny, the beaver was not to be trusted. The wooden shelf in the antique shop was getting smaller every day.
"Can we be sure it's actually shrinking?" Louise, the ceramic swan asked.
"I can see more of the floor than yesterday," said Egbert, a glass lobster.
Deborah, the crystal poodle spoke next. "I hear that devious beaver chewing in the night. I know it's him, and one day he's going to gnaw straight through this board and we're all going to fall. We'll be smashed to bits."
Cries of horror went up throughout the shelf.
"What should we do?"
"I don't want to die."
"Mommy!"
Edward, the stuffed owl took charge. "Clearly this murderous beaver must be stopped. I suggest we form a coalition. We'll call it: Wood Shelf Security."
"Yes, yes," said the crowd, "what a smart owl."
They had a meeting to discuss Sonny's relocation. In the far corner of the store were some metal shelves that would be perfect.
"But what about the wooden clothespin doll over there?" Louise said, "she's sure to be his first victim."
"The end justifies the means," Edward said. "Sometimes you must sacrifice one to save many." There were murmurs of agreement. It was decided.
But had anyone thought to ask poor Sonny about the shrinking shelf, they would have discovered three important things:
1. He dislikes the taste of wood.
2. He is a pacifist.
3. His place on the shelf affords him a view out the window. Sonny's favorite thing is to imagine shapes in the clouds. Because of this, he wouldn't destroy their perch for all the world.
It was night when the humans came and covered them with a tarp. The knick-knacks were convinced the end had come. Some whispered prayers. Most were silent, gripped by terror. But the next morning, the tarp was pulled away.
"That oughta' do it," one of the humans said to the other. "Worst case of termites I've seen in years. Good thing we sprayed now before the merchandise got damaged."
The next day, the kick-knacks recieved what they thought they had wanted. Sonny left their shelf.
The peace-loving beaver was purchased by a family who lived in a house full of windows, with a spectacular view of the sky.
Posted by Brittany Smith at Wednesday, March 09, 2011