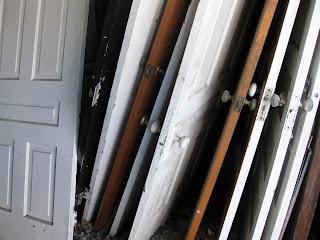 Stewart Rumple collects doors. Saturday mornings, he examines the newspaper and circles garage sale listings that look promising. He maps out a route in his head. He will take his bicycle. He's rigged it up to carry the doors home.
Sometimes people stare at the man pedaling a rusted red bicycle with a door lashed to it by bungee cords. Stewart doesn't care.
It started after Lee died. She'd never have put up with this kind of thing. He often marvels at how much he misses her chiding him about this or that. Now no one cares what Stewart does with himself.
"And look what's happened, Lee-Lee," Stewart says aloud, his voice booming in the garage where he keeps his doors, "I've turned into an absolute nutter."
They'd all told him to meet someone new. Even Lee, before she went said: "Love, there's no use moping around when I'm gone. You just find somebody to care for you. It's--" Her speech dissolved into a fit of coughing.
Two years have passed, and all Stewart can bring himself to do is get those doors. He imagines that each one opens onto a different reality.
Door one: He's five years old and has just caught a small brown frog. He holds it cupped in his palms and can feel the quivering little life inside his grip.
Door two: He's thirteen years old and sitting in the passenger seat of his father's car. There is music on the radio, the Beach Boys, "Help me Rhonda."  The sound of the music feels exactly like sunshine.
Door three: He's sixteen and riding his bike down a hill. He removes his hands from the handlebars and stretches out his arms.
Door Four. Five. Six. Seven.

Keep going.
Stewart doesn't care what everybody says. He won't stop looking until he finds a door that leads back to her.
Posted by Brittany Smith at Wednesday, March 16, 2011