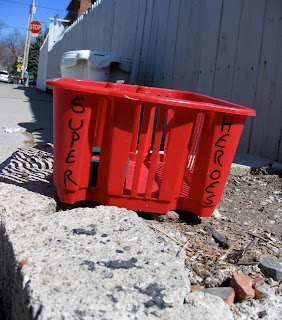 Batman needs another beer. He'd get it himself, but he doesn't want to miss the end of the show. It's time for the judges to deliberate. Who will be eliminated tonight?

There isn't much in the fridge, just two Budweiser tall boys, a jar of mustard, and the remains of some chicken chow mein. "Holy starvation, Batman," I say, "it's time to hit the Loblaws."
We wear civilian clothes whenever we go out but Batman still insists on the masks. He says it's to protect our identity, but there hasn't been an arch villain in Gotham city for years. I think he just wants folks to know he's still here.
It's true that Batman's never been a happy-go-lucky sort, but these days he's downright depressed.
Money's gone. We went bust a few years ago in Vegas when his gambling problem got out of hand. And if you got a bum hip and you’re broke, and hair’s thinning, the women disappear faster than you can say, “to the bat cave.”
He tells me I should leave. Start over. But I'm not going anywhere. "That's what sidekicks are for, old chum," I say, "to fight crime by your side, or to pick up your prescription."
The only thing that seems to cheer him now is television. So You Think You Can Dance is his favorite show. All those poor saps acting like they're just going to shake their way to the top.
But nobody tells you that even if you make it to the top, it's lonely up there. And it's a heck of a long way down.
Posted by Brittany Smith at Wednesday, April 20, 2011