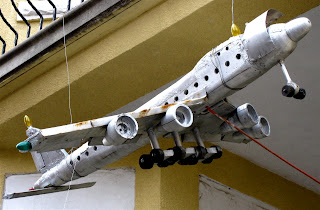 Rupert Small was a doorman at a fancy department store. He wore a black wool coat with silver buttons, and a cap. On his hands were spotless white gloves.
"Good morning," he'd say, holding the door open for customers. "Good afternoon." "Good night." As he greeted people, Rupert imagined he was a pilot welcoming passengers aboard his plane.
Rupert had dreamed of flying since he was old enough to gaze up at the sky. After work at night he'd sit at his kitchen table and build model airplanes. Sometimes Rupert constructed planes using scrap materials. One such airplane was hanging outside his apartment. He'd put it there to remind himself of what he wanted most.
But at the age of thirty-seven, Rupert had never been on an actual airplane, much less flown one.
Was it too late for him?
That particular fall afternoon was crisp, and Rupert was grateful for his wool coat. He stood at the door smiling and saying hello, but inside, his heart was heavy. Rupert was filled with certainty that he was going to work at the department store for the rest of his life. He was never going to fly.
He felt a single, solitary tear leave his right eye and run down his cheek. It wouldn't do to have a crying doorman. So Rupert left his post and went into the store to collect himself.
Have you ever tried to stop crying when the tears want to come? It is very difficult. Rupert walked blindly through the department store. He passed several cosmetic counters and thought to ask one of the salesgirls for a tissue. But then Rupert stepped on something.
He wiped at his eyes with his gloved hands and saw that he was standing on a little sock monkey. Rupert reached down and picked it up.
"Terribly sorry," Rupert said to the monkey.
Something about the monkey's smile made Rupert feel better. So much better that he did an unusual thing. He slid the doll inside one of the deep pockets of his coat.
Rupert Small couldn't have guessed that this meeting with Marvin the sock monkey would alter both their fates, and make his dream of flying come true.
To be continued...

Read the first part of this story here:
Posted by Brittany Smith at Monday, April 11, 2011