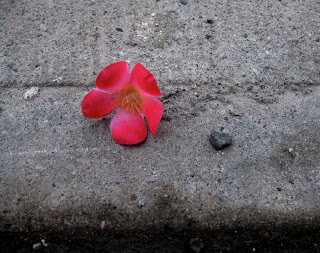 Sarah is wearing a strapless dress printed with palm trees and gold earrings that sway as she walks. Around her neck is a chain of fuchsia colored plastic flowers. A "good lei," Beverly called it earlier when she slipped the necklace over Sarah's head.
It was a Hawaiian theme party and Sarah brought her famous pineapple chicken. Now she is walking home carrying the empty pot. The pot is getting heavier with every moment. She longs to put it down, just leave it on the sidewalk, but won't because it was expensive.
She and John had a fight again tonight. Once it was clear they were going to argue, he'd tried to steer her into Beverly's bathroom. Sarah knew what was in there. Fierce words spoken in low tones so no one else at the party could hear.
For a long time now, she and John have been fighting in people's bathrooms. In hallways. Parking lots. Restaurant lobbys. Outside movie theatres. In elevators. On balconies. Anywhere no one can see.
But tonight Sarah pulled away from John at the bathroom door and rejoined their friends in the kitchen. A few minutes later she discovered that he'd left the party. She would have to walk home.
Sarah has almost reached their street. She looks down at her necklace. It's stupid, she thinks suddenly: this chain of plastic pretending to be real flowers. The necklace is a lie.
She shifts the pot into the crook of her right arm and with her left, wrenches on the necklace. It doesn't break. She pulls harder and feels the plastic dig into the back of her neck. Ignoring the pain, she pulls harder still. She nearly cries with frustration. She needs to be free of it.
Suddenly the chain snaps and pink flowers scatter over the pavement.
Sarah doesn't stop to pick them up.
Posted by Brittany Smith at Monday, April 04, 2011