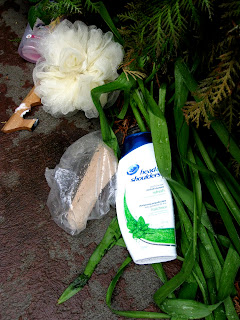 Kyle's shower ejected him on Tuesday while he was mid-shampoo. One moment, he was humming Help Me Rhonda, while lathering up and the next, he was lying on the sidewalk blinking through soap.
Kyle sat up and looked around. Beside him on the ground was his Head and Shoulders, and assortment of loofah sponges. The shower must've spat those out too. He got shakily to his feet and then realized he was completely naked.
Kyle hurried down the alley between his house and the next. He swiped a bathrobe hanging from his neighbour's clothesline. It was a woman's robe: short and light blue with a duck embroidered on the pocket.
Barefoot and still dripping, Kyle entered his backyard and headed to the back door. As he approached, the lock on the door snapped shut. The same thing happened when he tried the front door. Just as he reached for the handle, the bolt clicked. Then, unbelievably, Kyle heard the sound of the metal security chain sliding into place.
He tried the basement windows, but they wouldn't budge. When he used a rock to break a window, shards of glass shot at him. He yeowled and ran, dodging the wicked spikes.
Red-faced and sweating, Kyle collapsed in the middle of his yard.
It was clear that his house wanted him out.
Truth be told, he'd hated that thing from day one. It was his ex-wife, Barb's idea to buy it. She'd wanted a fixer-upper. They paid contractors to come in and gut it. Over time, it became clear that what Barb really wanted to fix-up, was Kyle.
Unsatisfied with her husband-project, Barb ran off. Kyle refused to put any more work into the house. For the past year, he'd lived among rubble and it was clear that the house resented him for it.
Lying on the grass, looking up at the cursed house, Kyle got an idea. In the toolshed, he found just what he needed.
The fire caught much faster than he expected. Smoke billowed and the flames danced higher and higher. The heat from the blaze was intense.
"Ha! Ha!" Kyle exclaimed, clapping his hands and performing a wild victory dance in his blue bathrobe.
He could hear sirens in the distance, getting closer.
Posted by Brittany Smith at Monday, May 30, 2011