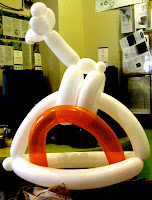 Something funny was happening to Everett.
At night in the dorm, while all the other first-year law students were sleeping, Everett stayed awake making balloon animals. There was so much squeaking and hissing of air, his roommate had to get ear plugs.
Soon, Everett moved on from dogs and horses, to dragons and tropical fish. As he walked through campus, Everett searched for new balloon shapes he could make. He wanted to bend the bright colors of the world.
In class, he began drawing pictures of balloon animals in his notebooks.
"Everett Lardiner, are we keeping you from something?" asked his Legal Reasoning professor.
Everett looked up from his drawing. In his mind, the old man's nose began to stretch. His neck became longer and longer. His limbs extended. Then, in a few deft movements, Everett twisted his Legal Reasoning professor into an elaborate hat.
He thought he might need some help. He went to the computer, planning to type: "counseling for law students" into the keyboard, but entered the words: "clown school," instead.
Mrs. May's Clowning College. Everett's heart thundered as he entered the site and read: "For Anyone Who Seeks the Way of the Clown." He knew then his life was about to change.
The next weekend he went home to see his parents.
They sat inside the screened-in porch. Everett and his father drank scotch and soda and his mother had iced tea. The May evening was humid and Everett could see the dark bodies of mosquitoes against the screen. He sympathized with them. He too, was searching for an opening.
"Tell us about law school, honey," his mom urged.
From his pocket, Everett produced a bag of brightly colored balloons. He made his mother a Dachshund. She held it outstretched as if it would bite her.
"What kind of nit-wit joke is this?" his father said.
Everett put down his glass. He cleared his throat and then told his parents what he'd come to say.
Posted by Brittany Smith at Monday, May 09, 2011