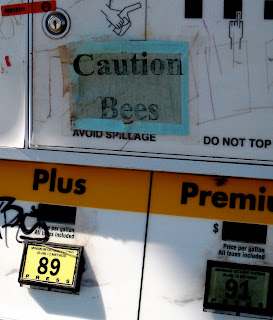 Dogs and bees can sense fear, and Larry Mint is terrified.
He is standing at a gas station in Dryden, Ontario. He didn't see the sign taped to the pump until it was too late.
His hand holding the nozzle is slick with sweat. Sweat is trickling down the back of his neck, tracing a path along his spine and pooling in his underpants.
Larry is in a very bad state.
His Chevy is running on fumes and there isn't anywhere else for him to go. He needs to fill up now. There's a pebble in his shoe, pressing into the soft underside of his arch. He'd love to bend and dig it out, but won't. In fact, Larry would sooner fly to the moon than move a single muscle.
He hasn't seen one of the little demons yet, but he knows they're around.
There was a time when he wasn't afraid of bees. As a boy, he'd wait patiently for one to land on him so he could feel the soft tickle of it crawling along his skin.
But then one day, his mother saw him. "A beeee!" she shrieked, rushing toward him, flailing her arms wildly. When the bee rose and circled her, she ducked and dodged as if possessed by an evil spirit.
"Bees have stingers," she said later, "they'll hurt you something terrible."
Larry couldn't connect the soft buzzing creatures with the idea of terrible pain, but the next time he came across a bee, he ran back into the house. Over the years, his fear grew and grew.
And now at this gas station, he turns and dives back into the Chevy, slamming the door.
It takes him a few moments to catch his breath. Then from inside the car, comes an unmistakable buzzing. Larry feels his bowels twist. Fresh beads of sweat form on his upper lip. Crawling across the dashboard without a care in the world, is a bee.
Posted by Brittany Smith at Monday, June 20, 2011