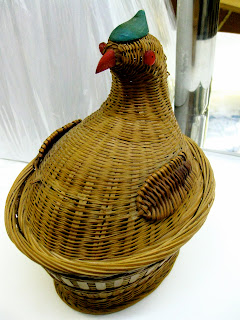 Dot keeps her rolls of exposed film inside the chicken. She has so many finished rolls that when she lines them up on the kitchen counter, end-to-end, they stretch past the toaster and almost to the blender. Each week she adds another.
The camera was a gift for her 8th birthday. She didn't use it until she was 10 and everything started to go wrong.
First there was her Dad. "Goodbye, kiddo," he said to her in the driveway with tears in his eyes and a duffel bag at his feet. "We'll have the weekends together now."
He was looking at Dot like he wanted her to say something. But the words didn't come and so she took a picture of him.
After that, she didn't know what to say most of the time. And so she photographed things instead.
Her Mom's new boyfriend, Rick with the bushy moustache.
Rick's dog, Buster with his spooky cataract-covered eyes.
Her Dad's new apartment with its grimy walls and the ripped window screen.
Her older sister, Alison's closed bedroom door.
On and on Dot goes, snapping photographs. She uses her weekly allowance to buy more film. And when she finishes a roll, she slips it inside the wicker chicken on the kitchen counter. Her Mom doesn't know about her hiding place.
When she dries the dishes at night, Dot looks at her chicken and thinks about those black plastic canisters with all of that life curled inside. Someday maybe she will develop every single picture. And then maybe she'll know what to say.
Posted by Brittany Smith at Wednesday, June 22, 2011