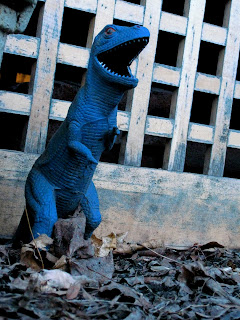 Hi folks. How are you all doing tonight? My name's Moe, but you can call me Blue-T.
So a man walks into a bar....Ouch. That's gotta hurt.
Anyone here like Mexican food? What do you call cheese that isn't yours?...Nacho Cheese.
Why did the dinosaur cross the road?...Because the chicken joke wasn't invented yet.

Silence. Blue-T clears his throat.
Wow. It's a tough crowd tonight. What do I gotta do for a laugh?
Uh, speaking of dinosaurs, what type of dinosaur can jump higher than a house?...Any kind! A house can't jump.
More silence. Blue-T is getting upset.


You guys don't know how hard it is. Every dinosaur in my family is successful but me. My brother, Ricky, he's over there in Japan. And my sister, Winnie's in Hollywood. Whenever she comes to visit, she likes to throw her money around, just so we all know she's a big shot.
My parents are disappointed in my career choice. They want me to demolish some cities, but all I want to do is make people laugh. I write all my own material and I've been practicing. But I guess I'm still a flop.
So, you guys think I should just give up comedy and start eating people?

Puts down the mic.

Alright, who wants to be first?
Posted by Brittany Smith at Wednesday, June 29, 2011