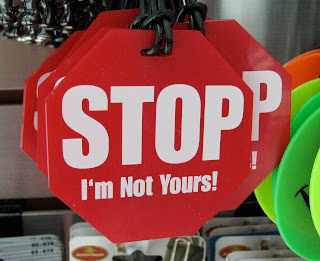 Nevil the scarf had been waiting a long time to make his move.
In the beginning, Mrs. Agatha Pike found Nevil at a market and offered the vendor a full six dollars less than the asking price. The vendor was insulted, but he had mouths to feed at home, and so he sold Mrs. Pike the discounted scarf.
Mrs. Pike never treated Nevil right. She picked at him with her long fingernails, dangled his tassel into her coffee, and sprayed him with terrible perfume. When she wasn't wearing Nevil, she left him balled up underneath her bed.
As he lay in the dark with the dust bunnies, Nevil wondered if he deserved this somehow, if he were to blame for his sad life. He cried a little. (The sound of a scarf crying is a mournful thing.)
But then one day, Mrs. Pike and Nevil were at the airport, on their way to Des Moines, to visit her sister. They stopped in the gift shop so Mrs. Pike could read the magazines (though the sign did say to purchase one before reading.)

As he waited wrapped around her neck, Nevil noticed something that changed his life forever. A tag. A luggage tag that said: "Stop. I'm Not Yours!"

When Nevil read those words (yes, scarves can read), he felt deep down in his fibers that they were true.
"I'm not yours!" he wanted to shout, "I'm my own scarf."
For the first time in his existence, Nevil felt very brave. And so when she bent to return the magazine to the rack, he slid from Mrs. Pike's shoulders and onto the floor.

At that moment, a voice over the loudspeaker announced that the flight to Des Moines was now boarding. Mrs. Pike hurried out of the gift shop, leaving Nevil behind.
Would Nevil ever find his way to happiness? He didn't know. But this was his chance and he had to take it.
Posted by Brittany Smith at Wednesday, June 15, 2011