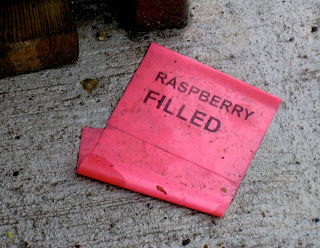 Sheila is thinking of having an affair with the man who sells donuts at the Tasty Bun. He's half her age, but something about the way he handles the apple fritters tells her he knows his way around a woman.
Sheila never caught the man's name, and so she decides it is Andre. She watches Andre's long tanned arms and graceful hands moving, plucking the pastries from the shelf and sliding them into bags.
She is nearly at the front of the line. Ahead of her are two grey-haired ladies and a man with a gleaming bald head and a rolled-up newspaper tucked beneath his arm like a handbag.
The ladies will split a cinnamon bun. Andre slices it in half for them.
Sheila imagines his bare chest beneath his t-shirt, smooth and chiseled. Perhaps he will take her right there in the shop. She imagines her own bottom dusted with icing sugar and nearly swoons.
Heat creeps up her neck. She feels her cheeks flush.
The man ahead of her in line needs a cake.
When Andre places the cake into the box, one of the icing rosettes smears. She hears the man gasp. But Andre takes a knife with a rounded end and carefully lifts the damaged rosette into his palm. He holds it like a baby bird and Sheila knows that her own husband, Harvey has never held anything as delicately as Andre holds this blob of icing.
Then it is her turn to order. Andre's brown eyes search her face.
"What do you need?" he asks her.
Sheila feels her throat fill up with things she can't possibly order.
"A second chance at my life," she wants to say. "All those years back. Your arms around me."
"Two raspberry filled," she says instead.
Sheila leaves the Tasty Bun with her white paper bag. She walks to the park where she will sit on the bench and eat the donuts. Tomorrow, she will be back. And Andre will be there for her.
Posted by Brittany Smith at Monday, June 27, 2011