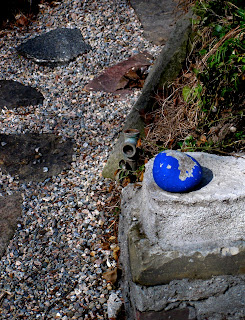 Whenever Sarah is sad, she places the blue rock at the end of her lane. And whenever Ned sees it sitting there, he brings it to her. He knocks softly on her door and she opens it to him.
Sarah never invites Ned to enter the house and stands in the doorway, blocking his view. Sometimes he can hear a television coming from inside, and once he caught the scent of toast. This thrilled him, her private cooking smells.
One afternoon, Ned stands holding the rock and sneaking glances at Sarah's face. Her curly red hair is going grey and her face is creased with wrinkles, but she's just becoming more beautiful with age. She's wearing a man's denim shirt that matches her light blue eyes. William's shirt, Ned guesses. When he husband died of cancer a few years ago, Sarah adopted most of his clothing.
Ned holds out the rock. "I think this belongs to you," he says, as he always does.
"I suppose so," she says, taking it from his hands.
The they sit side-by-side on Sarah's porch and she tells him what's bothering her.
Mostly it's her grown children who live in the city and don't call, but sometimes it's other things. Bigger things.
She sighs as she speaks of the famine in Jordan, or the South American farmers who fight to keep a pipeline from being built through their land.
"The world is too filled up with sorrow," Sarah says.
On this particular afternoon, for a reason he can't explain, Ned lifts his big callused hand and lays it over her small pale one. And he leaves it there as she talks.
Ned can't fix all the sadness of the whole world. And he doesn't have much to do with righting the smaller wrongs, either. But somehow with him just there, holding her hand, Sarah feels happy.
And after that, she doesn't have as much need for the blue rock.
Posted by Brittany Smith at Wednesday, June 01, 2011