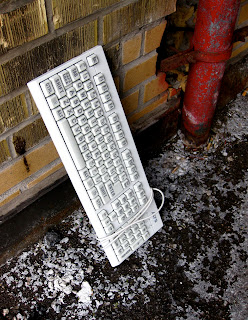 Josh's keyboard was causing problems. When he wasn't looking, it wrote: "Mr. Beaver must die," on the screen.
The courser blinked like an accusing finger. But Josh didn't type that message. It was the keyboard. The keyboard was to blame.
Josh unplugged the keyboard and carried it downstairs where he left it beside the dumpster.
He decided to get a new one and stood in the store for a very long time, examining the different models until he found one with honest-looking keys.
But the next day, Josh discovered the same words: "Mr. Beaver must die," on his computer screen.
Josh stomped around his apartment. He kicked over his kitchen chairs and ripped the sheets from his bed. He wrenched on the ends of his hair, which he usually did when he was upset.
When his third keyboard wrote the same thing, Josh began to wonder. What did those words mean? And who was Mr. Beaver?
Then it came to him. He would find this Mr. Beaver and get some answers. And if this mystery man, whoever he was, caused any trouble-well, Josh couldn't say what would happen then. He hoped it would go well. But he would do what had to do, to stop all this.
Posted by Brittany Smith at Monday, July 18, 2011