Margo and the Red Umbrella: Part 1 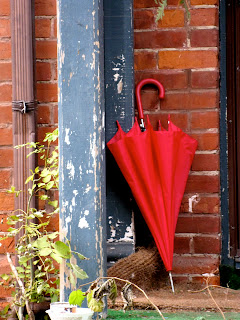 When Margo's mom left their family and never came home again, three things stayed behind. The first was a half-empty bottle of baby powder. The second, was a key chain that said: "Flora" (her mother's name) on it. And the third thing was a large red umbrella.
Margo took these items from her parent's room. At night, she dusted her sheets and pillow with the powder so she could fall asleep inhaling her mother's scent. She carried the key chain in her pocket, even though she had no keys. Whenever she thought of it, Margo would hold the key chain and make a wish. Her wish was always the same.

Of the three things her mother left behind, Margo loved the red umbrella most.
It was much too big for such a little girl, and she wobbled slightly under the weight, but Margo insisted on carrying it. It was a bright red sky above her, keeping her safe.
Then one day it began to rain. It rained harder and longer than the town of Aberdeen had ever seen.
On her way to school one morning, Margo passed a pine tree, and along with the sound of the raindrops pattering on the umbrella, she could hear a cat crying. She stopped. "Here, kitty, kitty," she called. And sure enough, a little orange cat emerged from beneath the tree, drenched and shaking.
Margo didn't know what it was like to be a wet cat. But she certainly understood what it was like to cry. "Would you like to come under my umbrella?" she asked. The cat studied her with its green eyes and then joined her.
Margo and the cat continued on and discovered an old man standing beside a car, fumbling with a set of keys. Water droplets fell from his bushy white eyebrows. His soggy plaid cap sat limply on his head.
"I can't seem to locate my car," he said, blinking and stamping his feet.
Margo didn't understand about cars or keys, but she knew what it was like to be lost. "Come under here and dry off a bit," she said, "then you can try again."
The old man smiled and joined Margo and the orange cat under the red umbrella.
To be continued on Monday...