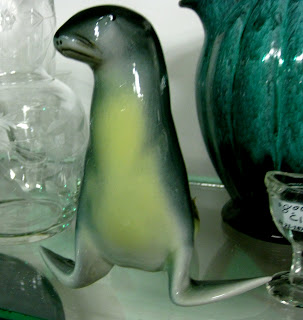 People have names. Animals have names. Little porcelain seal figurines do not have names.
Irene, the antiques dealer wants me to go home with anybody who's got the money, but I've been waiting for someone.
I'm not exactly sure who yet, but I'll know it when I see them.
It's Sunday at the St. Lawrence Antique market and we've just opened. The crowd spills through the doors.
Irene's got on her red lipstick that always leaves a smudge on the rim of her paper coffee cup. Wisps of grey hair have come loose from her bun. She smiles her best smile at the customers.
"I've got a set of silver thimbles from the Art Deco period," she says, "or maybe, you want a porcealin seal figurine?" With that, she lifts me into the air. I am passed around from hand to hand and then returned to the edge of the table. They don't want me, but it doesn't matter. I am waiting for someone.
He isn't a customer. He's snuck in without paying the entrance fee. A small boy with brown curly hair that looks like it hasn't seen a brush in days. His shirt is too big for him and unraveling at the bottom.
He comes closer to Irene's booth, where I am sitting on the edge of the table. He reaches out his small hand and strokes my head, strokes it as if I were a real seal and not just a figurine. "Hi," the boy says, "I'm Jonah. What's your name?"
Irene notices him. She takes in his unwashed appearance and dirty frayed shirt. "Get away from my booth, you filthy little scamp," she barks.
Startled, Jonah backs away. He turns and leaves the market. But not without slipping me inside his pocket first.
I found who I was looking for. And, he found me.
Posted by Brittany Smith at Wednesday, July 27, 2011