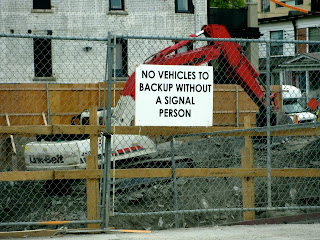 We're stuck. How was I supposed to know about the construction? I thought we'd take a shortcut, and now look at this.
You sit in the passenger seat with a tuna casserole on your lap. I wrapped it in foil, but it was still too warm, and sweaty little beads of condensation formed along the shiny surface.
The car smells of fish and rich cheese. I feel that we're steeping in the smell, and when we get to Barbara's we will stink of it.
Impatient, you drum your fingers on the top of the tinfoil. Put. Put. Put.
"Stop it," I say.
"I'm not hurting anything," you say. And then: "Looks like we're stuck.
The elastic of my Spanx "body-shaping" underwear is digging into the flesh of my stomach. I hate feeling like a sausage in a casing and I hate the way you always point out the obvious.
You've got to get out and direct me as I reverse the car. You leave the casserole on the passenger seat.
I got Wild Caught tuna at the health food store and it was 8 dollars a can. But it's worth it to use ingredients you can believe in.
You are standing behind the car, windmilling your arm, telling me to "Back up, back up. That's it. More. More. Whoa. Stop."
You run around, calculate the remaining distance between the fence and the car and then your arm begins to twirl again, telling me to keep coming.
I lied about the tuna. I bought the Wild Caught only because I wanted to tell Barbara's smug friends, the ones who feed their children goji berries in place of raisins that I used it. It's the same reason I'm wearing Spanx under my sundress in this heat, because I care too damn much what these people think of me.
Wouldn't it be nice to stop caring? Wouldn't it be glorious to turn around and drive home? I imagine you and me in our pyjamas, forks digging into the 8-dollar-a-can tuna casserole.
And when you reach the car and pull open the door, I smile up at you because I know exactly what I want to do.
Posted by Brittany Smith at Monday, July 04, 2011