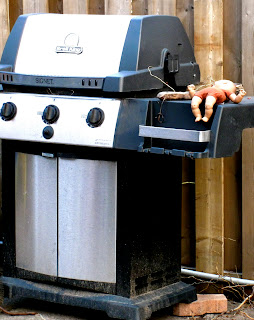 If he could just figure out how to turn it on. He's watched his Dad do it a million times. Leo can barely wait to see his little sister's face when her favorite doll goes up in flames.
Mary deserves it. She's always making trouble for him. Yesterday she told Mom that Leo and his friends were playing in the empty lot behind the school even though it's forbidden. Traitor. She was just jealous because he wouldn't let her play with them. He never lets her join in, because she's a little pest.
Last night he got three lashes on the backside with Dad's belt as punishment for being in the empty lot. He tried not to cry, especially in front of her, but tears rolled down his cheeks anyway.
Now it's payback time. He lifts the barbeque lid. It's heavy and he almost drops it, but finally manages to get it open.
Leo places the doll on the grill. Her blue eyes close, as if she knows what's coming.
Leaving the lid open, Leo crouches and twists the knob on the propane canister. What's next? The dial on the front of the barbeque needs to be turned on.
Whoosh.
Flames shoot upward so fast. Leo stumbles backward. The horrible smell of burning plastic mixes with the odor of his charred hair.
Mary comes out of the house, rushing toward him. She sees her doll burning and ignores it, turning instead to her brother, fear and devotion on her face. "Leo," she says, "are you okay?"
Posted by Brittany Smith at Wednesday, August 10, 2011