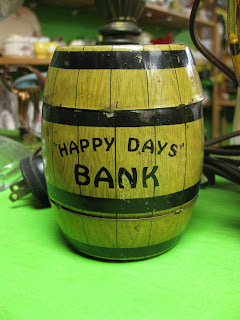 Kirby Newsom is saving for a sailboat. He's been saving for twenty three years, ever since he started working at Splish Splash Laundry.  It might take him twenty-three more years to get that boat. "No matter," Kirby tells himself, "it'll come."

As the dryers spin round with people's clothing inside, Kirby sits on a wooden stool by the cash register and listens for the tell-tale sound of change forgotten in a pocket. Tickity-tick, tickity tick. Any money left behind in the dryer belongs to Kirby. And this is what he saves.

At home, Kirby feeds the coins into a small change bank with "Happy Days" written on it. As he does this, Kirby thinks of the Happy Days to come. His sailboat will be long and white. He will name it: Lady Suzanna, after his late mother.

Whenever the Happy Days bank is full, Kirby pours the money into empty detergent jugs he gets from the shop. There are many bottles clustered together in his living room. But not enough. Not yet.

During the long afternoons at Splish Splash, when the air is warm and smells of dryer sheets, Kirby reads the newspaper. He likes to come across odd stories. There are many unexpected things happening in the world.


A homeless man in Utah was stopped by a private investigator who told him that his long-lost brother had died and left him an incredibly large sum of money.
After a devastating earthquake in Haiti, a man who was trapped in the rubble for 27 days survived.
Two decades after an elementary student in Seattle tossed a message in a bottle into the ocean, it was discovered by a man living in a small town in Alaska. The bottle had travelled 1735 miles.
Will Kirby Newsom ever buy himself a sailboat using forgotten change? Stranger things have happened.
Posted by Brittany Smith at Monday, August 29, 2011