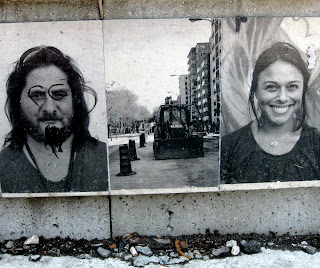 Reasons I don't love Carl:
(In No Particular Order)
1. He's always sweating. Not just when really exerting himself, but also when doing things like walking our dog, Lucy, or carrying groceries.
2. He refuses to wear a suit jacket even when the occasion calls for it, such as Dom and Sarah's wedding or my Nana's funeral. He also won't get a haircut for these same events.
3. He never apologizes for anything. Or when he does apologize to me, it's with a tone that says: "Lily, I am humoring you."
4. He laughs when he's nervous and it's a bad, snorting sound, not the kind of laugh that makes you want to join in.
5. He repeats his stories. Like the time he almost met Kevin Bacon, or the time he went on a fishing trip and got a lure in the face and needed twelve stitches.
6. He can't dance. Not at all.
Reasons I do love Carl:
(In No Particular Order)
1. He cries when he's happy.
2. He never, ever comments or raises his eyebrows if I order dessert, even if I've just told him I suspect that I am fat.
3. He makes me laugh. Such as the time Dom and Sarah got us a portrait of ourselves for our anniversary and once they'd gone, he drew funny glasses and a beard on the image of his own face.
4. He doesn't mind that I order things from the internet and return most of them.
5. He always snakes the shower drain for me when it gets clogged with my hair, because he knows that just the thought of doing it makes my skin crawl.
6. He repeats his stories. Like the first day we met, when the bus broke down and we shared a taxi, and he pretended to live nearby just so he'd get to keep riding with me.
Posted by Brittany Smith at Wednesday, August 24, 2011