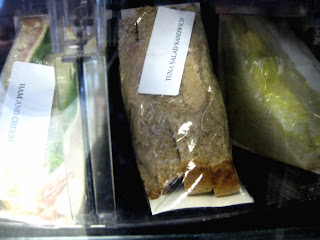 It is Tuesday morning in the office cafeteria and three things are happening at once.
One, Marsha is pressing the green button on the display fridge and the packaged sandwiches are going round and round. Two, she is saying the words: "egg salad, tuna salad," under her breath as each type of sandwich appears then disappears. Three, Solomon Holdstock is behind her, watching her do this.
"Egg salad, tuna salad." A ham and cheese makes an appearance and unnerves her. She feels that she will never be able to choose a sandwich, and this moment will play on forever, with Solomon waiting behind her, his breath on her neck and his little skin particles wafting onto her skin.
Things have been getting worse for Marsha since Lenny left. He hated her constant hand washing and the way she changed her clothes twice a day. But then she saw that documentary on tv about the microscopic view of the body and she couldn't stop talking about the skin flakes."There's nothing to protect us," she said, "our skin just comes off onto someone else."
"You're flipping crazy," Lenny said.
Now in the cafeteria, Marsha's breath is coming fast. "Egg salad, tuna salad." The sandwiches keep spinning. "Choose," she urges herself. She wants to slap herself in the face and then becomes frightened that she actually will.
Behind her comes Solomon's arm. She sees his thick finger push the red button. An egg salad sandwich drops into the chute. Marsha takes it and places it on her tray. She turns to face him. "Thank you," she says.
His smile is kind, so kind, she almost doesn't mind about the skin flakes.
"I can't ever decide, either," he says.
Posted by Brittany Smith at Wednesday, September 07, 2011