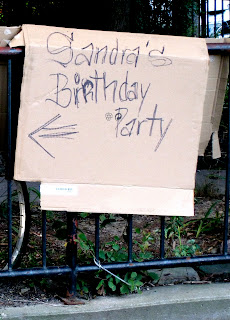 My dress is more flattering than Sandra's. She looks like a sausage in a blue shiny casing, but being her best friend, I would never tell her that.
I give her a kiss. She's gone overboard with the Poison perfume again, which I happen to know isn't Poison at all, but Poisonous Nights, a knock-off version.
I can tell she's had too many vodka coolers by the way she wobbles on those heels. Those heels, by the way, do not match her dress, but I don't mention it. Sometimes you've got to be the bigger person.
"Ray will be so happy you came," she says, gesturing toward her boyfriend at the barbeque.
Ray is, in truth, an oaf. He's tall and a little pudgy round the middle and he always wears these sloppy sweaters. Next to Sandy, he's like a giant in one of those children's stories. Like Jack and the Beanstalk. Plus, I think he wants to sleep with me. I'd tell her about it, but I'm too good of a friend.
Later, Sandra finds me at the snack table trying to choke down one of her horrid sausage rolls. She's swaying on those heels, looking like a boat tied up in the harbor.
"I love you, Marnie," she says to me.
"I love you too, Sandy," I reply.
Then I tell her she looks beautiful which we all know is a bald-faced lie. What can I say? Some people are givers and some are takers. Me, I'm a giver.
Posted by Brittany Smith at Wednesday, September 28, 2011