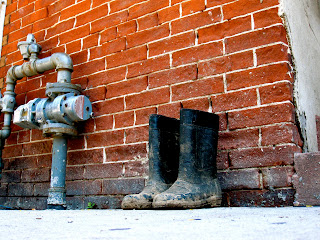 On Saturday, Herb's boots went walking and didn't come home until Monday.
Herb opened the front door on Saturday and stuck his left sock foot where his boot top should be. It found only air. No boots. He squeezed his eyes shut and opened them. Still no boots.
Maybe he'd left them someplace else? Herb searched his house. He even checked the bathtub and the oven. "If your boots are in the oven, old-boy," he told himself, "you've got a good deal more trouble than a couple of missing Wellys."
Herb's boots were nowhere to be found. He pushed his recliner to the window, where he could keep an eye on the front step.
Mid-morning, the phone rang. It was Walter. Every Saturday, Walter and Herb met in Sorauren park and shared a copy of the Globe and Mail, and some bourbon from Walter's flask.
"Hey geezer, you can't find your teeth or what?" Walter said. "I'm not getting any younger waiting for you."
"Walt, I can't come today."
"What's the matter? You sick?"
"No. I'm waiting for my boots."
"Your what?"

At mealtimes, Herb brought his t.v. tray to the recliner and ate with his eyes on the front step. He began to wonder where exactly his boots had traveled off to, and of course, why they left him at all.

Maybe they'd gotten fed up with sitting by that wall. Truth be told, since Jeanne passed away four years ago, Herb didn't go out much. When she was alive they used to travel.

The two of them in the motor-home, driving out west where the trees were taller than churches, and down south to dip their toes into the ocean and watch the pelicans fish.

It's not that I don't want to go anywhere, Herb thought, it's just that no place feels quite right without her. Herb's eyes grew heavy. As he drifted to sleep, he made a decision. "If my boots come back, I promise to take them out more."

And then Monday morning, there they were, leaning up against the outside wall as usual. Herb stood in the doorway with his arms crossed. He was so relieved to see the boots he felt his eyes water over. He mouthed a silent thank you.

Things would be different for all of them now.
Posted by Brittany Smith at Monday, September 26, 2011