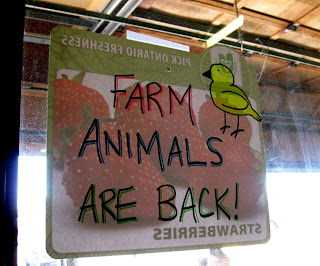 The chickens started it. One day in the yard, the red hen said: "I have it on good authority that farmer Lawson's grass is the longest and greenest around."
Of course, the cows were interested in that.
"And his oats are the freshest."
The horse pricked up her ears.
"And his slop the most succulent."
The sow groaned with delight.
The barnyard debate began. "I don't believe you," some animals said, "it's no different there than here." "But what if she's right?" others wondered. "What if we can have it all?"
So it was decided. We would make a trip to Lawson's farm to see for ourselves.
In the days that followed, we planned our escape. I assisted the other goats in chewing a hole in the fence. This took us a great deal of time as we had to make the gap tall enough for the horse and the cows to fit through, and wide enough to accommodate the pig.
When the day came, we waited until after breakfast to make our move.
The chickens led the way and the rest of us followed in a long line that stretched down the lane. Farmer Kibble had traveled to town that morning and wasn't there to watch his animals go. But his daughter Sadie saw us. She stood on the porch, waving goodbye.
When we finally arrived at Lawson's farm, we discovered that it wasn't much different than Kibble's place, after all. The grass was merely average length, the oats were ordinary, and the slop was, in truth, a little dry.
So one by one, we turned and started heading back.
We arrived home just before farmer Kibble returned from town. To this day, he still doesn't know that we left. Course, Sadie does. When we got back, we saw she'd made us a pretty little sign.
Most of us couldn't read it, but there was a lovely picture of a chick on it, and the dog told us that it said: "Farm Animals are Back!"
That was the last time anyone listened to the chickens.
Posted by Brittany Smith at Monday, September 12, 2011