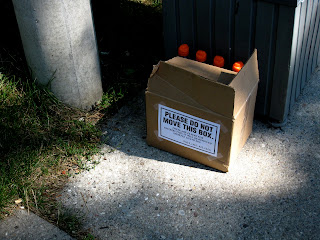 Before Wilhelm Streak, the famous archeologist disappeared forever, he filled four bottles and placed them on the street beside a cardboard box. The box held four envelopes. Inside the envelopes were letters that revealed what the liquid in the bottles really was.
Wilhelm had spent his life searching for the fountain of youth. Many times, he'd nearly died for it. And now that he'd finally found it, he wanted to share. But how could he choose who would live forever?
This was the only way. The gift was right there on the sidewalk for the taking. Fate would bring the one most deserving.
Wilhelm hid himself nearby and watched....
Rodney Dunn's first day of community service wasn't going well. Twice, he'd stepped in dog dirt, and once he'd stabbed himself in the knee with the end of his litter pick-up stick.
He was wearing an orange pair of coveralls that made him feel like a giant walking pylon. Stamped on the back of the coveralls were the words: "Bayside Correctional Services."
The afternoon was hot and it must've been a hundred degrees inside that suit. Sweat was running down the back of Rodney's neck. His mouth was dry and his tongue felt like he'd been licking a chalkboard.
He wanted to find a nice patch of shade and have a nap. But he needed to keep going, picking up the trash. The judge had made it clear: it was either this or prison.
Still, no judge could fault him for a little smoke break.
Rodney put down his trash bag and fumbled in his pocket for his cigarettes and lighter. He noticed a box someone had left on the curb and groaned. What was wrong with some people that they couldn't clean up after themselves?
But wait--beside the box were three, no, four bottles of water.
Rodney's luck was changing! He twisted the cap from each of the bottles and gulped them gratefully. Then he picked up the cardboard box and without looking inside, dumped it into his trash bag.
Posted by Brittany Smith at Wednesday, October 19, 2011