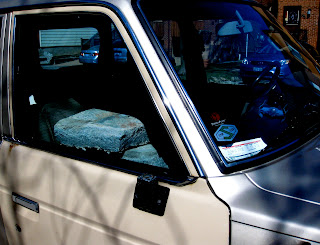 Bryan has been driving around with rocks in the passenger seat for a week. When Casey rides in the car with her husband, she has to sit in the back, like a child.
The rocks are flagstones for the patio Bryan is constructing in their new yard. "Imagine it, sweetheart," he says, "barbeque dinners out there in the summer, with our little ones playing in the grass."
Casey never asked for kids, or a stone patio, or a house in the country. He wanted all that. She just wanted him.
On Saturday she's in the backseat, looking at the back of Bryan's head when an idea hits her. The radio is on, tuned to her favorite jazz station, but the music is interrupted every few seconds by bursts of static like gunfire. They're too far outside the city to get a clear signal. Casey looks at the stones piled up on the passenger seat and suddenly becomes certain that she is buried beneath them. The her sitting in the backseat is a fake.
Someday soon, Bryan is going to move those stones and the real Casey will be released. What will happen then?
Posted by Brittany Smith at Wednesday, October 12, 2011