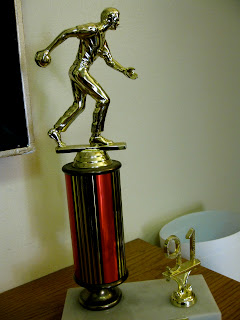 Danny was King of the Lanes. The other bowlers called him "King," and when they asked him questions, it was: "King, what's the score?" or "How's my form today, King?"
He didn't look like a bowler. He had tattoos running up both arms and long black hair streaked with grey. He was six feet, three inches tall and two-hundred and forty seven pounds. But when King stepped onto the lane and sent that ball rolling, he was a ballerina in bowling shoes.
Today is the final game of the regional championships and King is nervous. His team, the Silver Bullets are down by twenty pins.
Beside them, the the Holy Rollers are already victorious. Their captain, Zeus tips his bottle of beer in King's direction and grins. King cringes at the thought of that weasel and his gutter gang taking home the trophy.
It's the last roll and King and Zeus are up.
Zeus is now leading by only eight pins. King just needs a strike to win the match. He lifts his ball from the rack and strides forward.
At that moment, one of the Holy Rollers yells: "Hey Danny, don't choke." Laughter follows, and during this laughter, Zeus removes a small bottle from his pocket and squirts baby oil onto the lane in front of King.
No one sees it happen. But everyone in the bowling alley witnesses what comes next. King slips in the puddle of oil and comes down hard, all two hundred and forty seven pounds of him. His nose smashes into his bowling ball. Pain shoots through his skull and blood gushes from his nostrils. He can barely see, but he struggles to his feet.
Through the blood and spittle and tears, the King bowls.
His arm swoops like the wing of an angel. The ball is released at precisely the right moment and sails down the lane like judgment day. The pins don't so much fall as scatter.
Shouts rise up all around him. Someone clasps him by the shoulders. Another person kisses his cheek. The Silver Bullets have won the championship.


They don't call him the King for nothing.
Posted by Brittany Smith at Monday, October 24, 2011