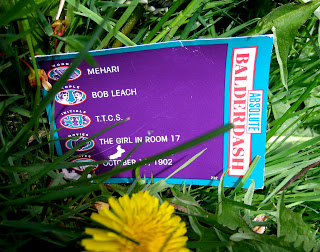 It is Thanksgiving and Brian's mom brings out the sweet potatoes which he knows Cheri hates. But she will eat them and swear to love them because she is a liar.
Pseudologia fantastica. Compulsive lying.
She has medication, but he never knows if she's taking it. Brian and the doctors are the only one she's told about her condition. Not that Brian's ever met any of these doctors, though he's tried to come along to her appointments.
She was a real mess when they first met. It was last summer at their friend, Roger's place. They were playing Balderdash, of all things. Cheri was an ace at that game.
They shared a cigar on the patio. She told him they were from her recent trip to Cuba. He remembers the spicy-sweet of the tobacco and her long legs in a mini skirt. She eyed him through a haze of smoke. "I'm not good for you," she said. For a moment, he thought she was talking about the cigars.
The next three months were the happiest of Brian's life. Cheri told him of her childhood in Spain, her job as an acupuncturist. She had her mother's blond hair, and her fathers affinity for old cars. Brian was in love with the most interesting and gorgeous woman he'd ever met.
Then, came the crash. Cheri lying on the bathroom floor. The tears and screaming and...the truth.
At the Thanksgiving table, Cheri helps herself to a second plate of sweet potatoes. "Brian and I are getting married," she announces.
His mom gasps. His father's eyes fill with tears.
Brian pulls Cheri outside to the front porch.
"What are you talking about?" he says.
"You asked me and I said yes. Your dad is so thrilled!"
"I didn't ask you, Cheri. That's not true, it's a lie."
She steps back and gives him a steely look. He is reminded of her on the first night they met. He can hear her voice in his head: "I'm not good for you."
"How do you know it's a lie?" she asks him.
Brian feels himself slipping off some edge in his mind. How does he know? How does anyone know?
He takes her hand and they return inside to toast their upcoming wedding.
Posted by Brittany Smith at Monday, October 03, 2011