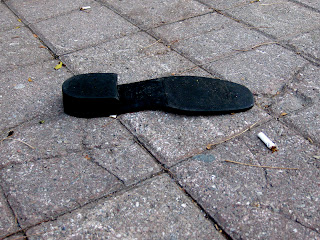 Louise? It's Gertie calling. Listen, I know it's early, but there's something I have to tell you. Billy, my next-door neighbour has been abducted by aliens again.
Just now when I went to let in Mr. Whiskers, I saw lying on the sidewalk, the sole of Billy's right shoe and the butt of one of his cigarettes.
I really can't explain why those aliens didn't want to take the sole of Billy's right shoe. I suppose you never can tell about things like that.
Like in Zimbabwe, with those women who don't wear anything to cover their chests and they just walk around with their knick-knacks out and hanging low.
All I'm saying is, there's no accounting for taste.
I know what you're going to ask me, Louise. No, this isn't the first time Billy's been taken.
Once, he woke up on a ship covered in blinking lights like the Las Vegas strip. These tall creatures with slanty eyes asked him all sorts of questions without speaking.

You read me, Louise? Their voices were inside his head.

The aliens wanted to know things like what does chicken taste like, and what is the purpose of foosball, which I don't understand myself, so it's a good thing it wasn't me on that spaceship!
Billy answered as best he could, and then the next thing he knew, he woke up in his own bed. Like nothing happened. But this time--
What's that, Louise? Yes, I have been taking my medication. I don't know what that has to do with--
Listen, Louise I don't think I like your tone. I don't think I care for it one bit.
Well that's rich. Billy is lost somewhere in the cosmos, but you just have yourself a good morning, Louise. Sorry to have disturbed you.
Click.
Posted by Brittany Smith at Wednesday, November 30, 2011