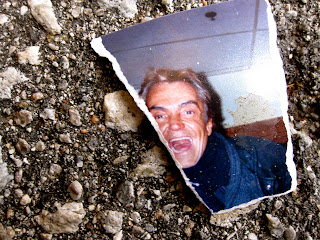 Cheryl is reading a book called: "Woman without her Man," by Doctor Eliza R. Hamm. On page 45, Dr. Hamm tells her to release her past.
Cheryl sits with a photo album on her lap. The album is blue and made of fake leather. On the front, in a loopy gold script are the words: "Memories are for Keeps."
She opens the album and peels up the clear plastic sheet covering the first set of pictures. The sheet comes slowly, grudgingly, making a suck-smacking sound.
Cheryl lifts a picture from the page. She and Jon in Orlando on their first anniversary, sunburned, sitting at a patio table, their glasses raised in a toast.
Cheryl tears the photo, removing Jon. The Jon half falls to the floor.
On page 78, Dr. Hamm says time heals nothing. What you do with the time is what counts.
Cheryl rips Jon out of the next one, and the next. When she discovers a picture of him and Elizabeth together, she shreds the whole thing to bits.
On page 103 it says: "If a man is unfaithful once, he will be again. No indiscretion should be forgiven."
There are little Jons all over the carpet. Jon at Amber and Dwyane's cottage. Jon at her birthday party last year with his mouth open, frozen forever shouting the word: "surprise"
Cheryl knows she should throw all these Jons out. Toss them out the window and watch them drift to the pavement. Or burn them in some kind of ceremonial purging.
Instead, she collects each one and slides them into an envelope. She keeps the envelope in a drawer, beside the photo album.
Posted by Brittany Smith at Monday, December 12, 2011