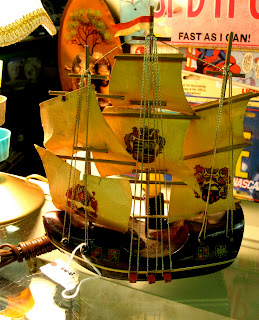 It is night in the Acadia Antiques shop and two cockroaches are playing aboard a model ship.
"Ahoy, land lubbers. Name's Captain James Quick and this here's me first mate, Scab. We've sailed the nine seas, plundering and pillaging. None who've battled us lived to tell the...
What's that, Scab? There be only seven seas? Friends, pirates, forgive me first mate. He's been long into the rum.
Legend has it...
Scab, if you'd stop interrupting me. What's that?
You've found a treasure? On this here ship?
We'll, I'll be an oyster's lover, it's a golden nugget so big. Bigger than us, Scab. I've never--we're rich!
Wait, Scab. Put down the treasure. You don't look so good. You've gone all pale. Now you're on your back and convulsing something rotten. Looks like you're in Davey's iron grip. No, Scab! Scab?
I've lost me best mate to a mysterious sickness. I had to toss his body overboard, sent to his meetin' with Davey Jones. Now I'm all by me lonesome on these vicious waters.
I won't touch the deadly golden nugget, though it calls to me like a mermaid's song.
What'ya think, me hearties? What's say I take just a little?
Posted by Brittany Smith at Wednesday, December 07, 2011