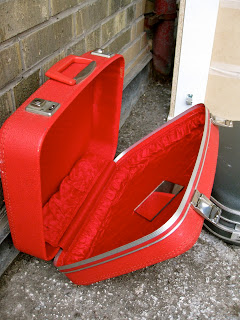 Jenny's best friend is a tarantula named Lenny.
Lenny sleeps at the foot of her bed, curled into a ball no bigger than a walnut. In the morning, he climbs into Jenny's red suitcase and they set out together to school. Jenny keeps a mirror inside the suitcase so Lenny can look at himself. (Tarantulas are a little bit vain.)
During recess, Jenny retrieves the red briefcase from the coatroom and sits under the biggest elm tree by the fence to tell Lenny what she's learned.
After school, their favorite place to go is the library. Lenny likes Charlotte's Web best, though when she reads it to him, Jenny does change the ending, so he won't get upset.
But there are things a spider and a little girl can't do together.
Sometimes Jenny plays catch with her Dad. He throws the ball so hard it hurts her arm when it lands in her glove, but Jenny doesn't complain.
Saturdays, he takes her shopping at Murphy's Hardware. As her Dad walks up and down the aisles, examining the different nails and bolts and wires, Jenny follows. She stays very quiet and doesn't cause any trouble at all, so he'll want to bring her along the next Saturday too.
Jenny knows a secret and she whispers it to Lenny: Her Dad didn't want a girl. He wanted a boy.
Lenny understands. Nobody likes tarantulas either. Most of the time people prefer they were a bunny or a kitten.
One night, Jenny woke and didn't see Lenny sleeping at her feet. She climbed out of bed and crouched on the floor, looking underneath her bed. No spider.
Out into the hallway, Jenny went, whispering his name: "Lennnny. Lennnny."
Her parent's bedroom door was ajar, and when she looked inside, Jenny gasped. This little girl who was not a boy did her best to be good. But now she was about to cause some major trouble.
Because there on the chest of her sleeping father, was Lenny.
Posted by Brittany Smith at Wednesday, December 21, 2011