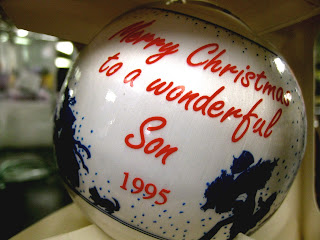 Pat is an architect. When he was young, he thought he'd build another Eiffel tower. But Pat designs suburban homes.


Today he is decorating the Christmas tree. He and Jake are supposed to be doing it together, but his son is stretched on the couch playing a video game. Pat doesn't mind. He's enjoying sitting on the carpet with a glass of rum and eggnog, excavating their ornaments from a battered cardboard box.
Pat hasn't seen most of these decoration in ages. He and Jake have moved seven times in the last four years, and have never bothered with a Christmas tree.

Pat's work requires they relocate every six months. They set up on the outskirts of a town while Pat oversees the building of a new housing development. In Oshawa there are homes that are exact copies of ones in Winnipeg. Right down to the window frames and shutters.
Pat opens something wrapped in red tissue and discovers a Christmas ball. On it are the words: "Merry Christmas to a Wonderful Son."

1995. She'd got this ornament for Jake the year she was diagnosed.
There was only one Mollie. She was utterly unique. His Eiffel tower. On their first date, he'd constructed a bridge out of creamers because he was so nervous. He thought he'd never get a second date. But she'd chosen him. She told him he was going to transform the world.
Pat sits staring at the Christmas ball for what feels like a very long time. Then he looks up and notices his glass is empty. He knows without recognizing it yet, that all their moving has come to an end.
"Jake," he says, holding up the ornament to his son, do you remember this?"
Posted by Brittany Smith at Wednesday, December 14, 2011