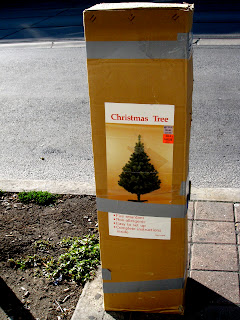 Robinson, the Christmas tree didn't have much time to flirt with the new ornaments before they were packed away till next year.
And oh, how he loved an attractive young ornament hanging from his boughs. The porcelain doe wearing the Santa hat. The silver angel with white feather wings. Come next December, none of those adornments would be new, and they wouldn't seem quite so...appealing.
But every December, just as he started to work his charm, there was Magda, that ancient ballerina with the chipped nose and dirty tutu, chattering non-stop.
"Robinson, your branches look extra green this year."
"I do hope they sing "Oh Christmas Tree." It's the best carol, Robinson. Don't you think?"
"There seem to be more presents this year, Robinson. Wouldn't you say?"
He wished the family would toss Magda into the trash. Their cat batted at some of the decorations dangling from his lower branches. "Take her," he prayed, "break her."
But this year, the man and woman pulled Robinson from the cardboard box, shook him out, and just when they'd started to decorate him, they left.
He felt naked and wished they'd given him some tinsel or at least a couple of candy canes.
Then they returned carrying something. It wasn't until they'd plugged it in, and he saw the blinking lights that Robinson knew what it was. A Christmas tree. Different and strange and...new.
Robinson was stuffed back into his box and left on the curb in front of the house.
How could this have happened? he wondered. They replaced me. Robinson started to cry and his sobs echoed inside the cardboard box, a damp and dismal sound.
Then he heard something else.
"Do you think we'll have snow for Christmas this year, Robinson?" a voice asked.
Madga. They must've hung her first, and not noticed when they threw me out.
For the first time, Robinson wouldn't have traded that grimy old ballerina for any shiny new decoration in all the world.
Posted by Brittany Smith at Monday, December 26, 2011